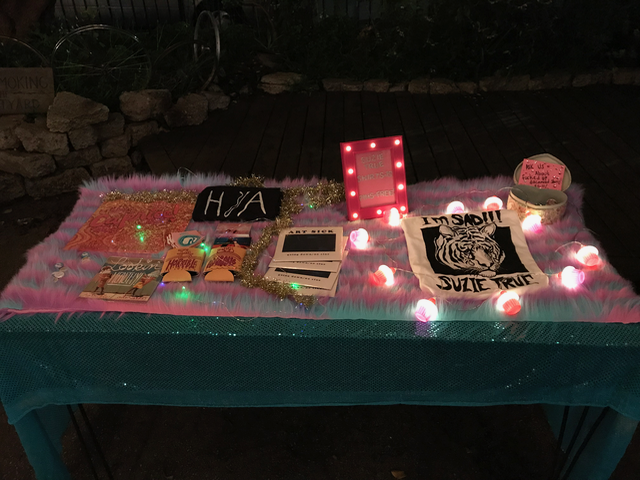 Tonight (Jan. 25, 2019) I am going to anarchist collective Subrosa in Santa Cruz to see Horrible/Adorable and some other bands. Kind of an early show on a Friday night. I park in our “secret” lot off Chestnut street. It is maybe a half mile from Subrosa, but I think a little walk would be good for me before the show. I have a couple of puffs of ganja after I’m safely parked.

As I walk to the venue thoughts are racing through my brain. Weed has a way of doing that to me. I have mixed feelings about going to shows alone – especially tiny venues where I can’t really blend into the crowd. Then I think about how nobody really knows what they’re doing, and we’re all in this together, and who really gives a fuck.

Subrosa is further away than I think. I keep thinking it’s going to be the next street, and finally I have to open up Google maps like a dork to find the place which I have probably walked past 100 times. But there it is at last. I later learned that this little bunch of organizations are collectively part of something called The Hub or Santa Cruz Hub for Sustainable Living. It is a non-profit that includes a bike church and some other good things and, obviously, Subrosa.

There is a kind of outdoor sitting area, a festive merch table, and a woman at a table who is taking donations. I pay my $7 suggested donation and gathered a little intelligence. I learned that I missed the first band, Art Sick, a late addition to the bill. There were still 3 bands to come and I definitely did not miss Horrible/Adorable.

Eventually I hear the sound of amplified music coming from inside the venue, so it’s time to go in. Subrosa is not much bigger than my living room, and my living room is not that big. Behind the stage is a sign proclaiming “Anarchist Library” and it is indeed full of books. There is another display off to the side with 100s of zines. I will say I really like this place, and its earnestness.

Anyway, the first performer turns out to be none other than donation-taking girl who turns out to be Chelsea Jones. Just Chelsea on vocals and playing her electric guitar. She is loud, raw and quite compelling. Musically it borders on the primitive, but she’s honest and emotional, and not afraid to take chances musically and vocally. It was a very promising opening act.

Next up is Suzie True from Los Angeles. They are a 3-piece power trio and they came to rock and possibly break your heart. They had a pure, stripped-down sound, with good hooks, and well constructed songs that kept my interest for the duration. I would see them again in a heartbeat, and was bummed they had no tapes or cds.

Horrible/Adorable was down from Oakland, California, and this was their first time performing in Santa Cruz. I had seen them open for Ian Sweet back in 2017, and honestly they were my favorite part of that show. H/A are irreverant, light-hearted, but also totally rocking. And they did not disappoint tonight.

They opened up with Hail Sk8tn’, a tongue in cheek anthem to being a bad girl:

Give me one good reason, why I shouldn’t be a heathen?
I tried to be like you, I did all I could to
You got your God I got my skateboard and my guitar
You’re having kids I’m having whisky at the bar
Call me immature, I guess I’m going to hell, but who fucking cares?

Next song is DMV Dream, also off the Lookin’ Healthy EP. It explores the perils of meeting a cute 16-year old boy in line at the DMV. After the song ended, drummer Candice announced “and she can drive a stick now!” Another highlight was a rousing cover of Fuck and Run off of Liz Phair’s iconic Exile in Guyville album.

The duo has a new EP titled Caprice, and they played at least 3 of the songs, including the title track as well as Penpal and Butthurt. Impossible not to have a smile on your face watching these girls. After the set ended, I waited around for Kristin to wander out to the merch table. I picked up the new EP, and expressed my joy at being able to see their first Santa Cruz show. 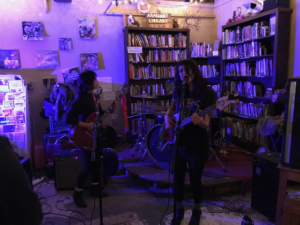 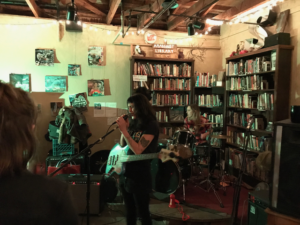 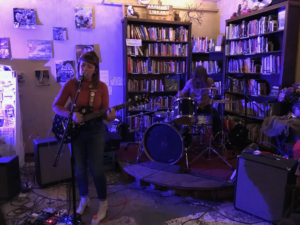 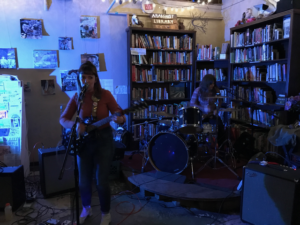 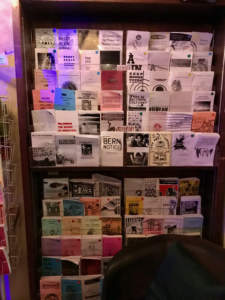 Zines on Display at Subrosa