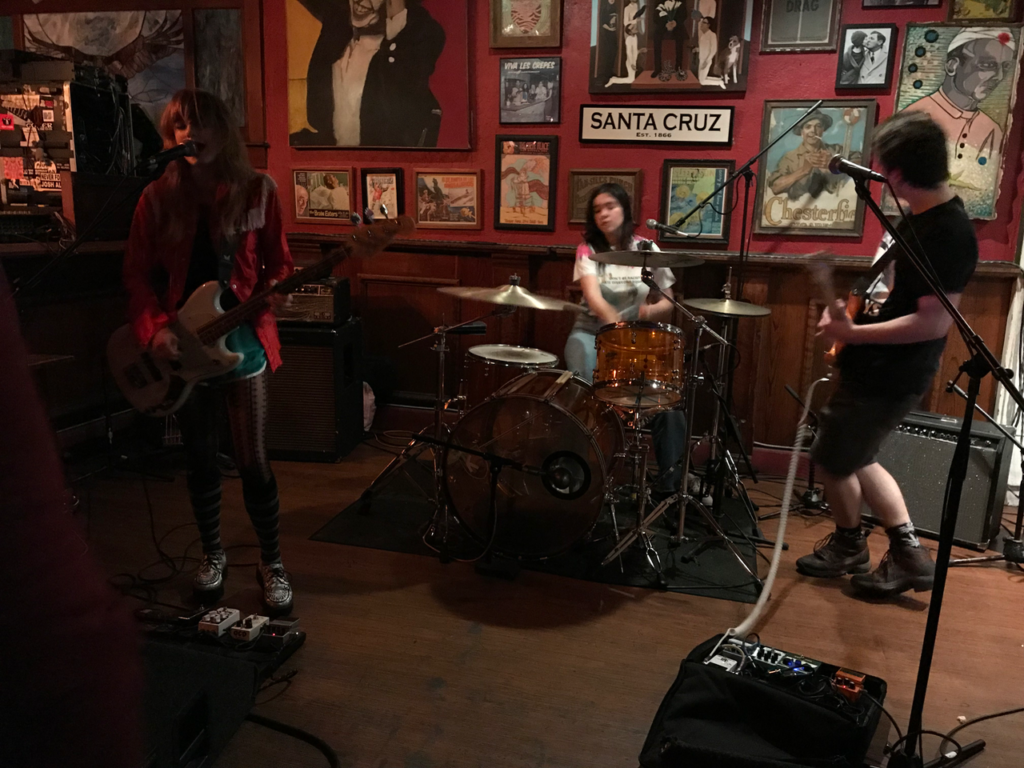 I got to the Crêpe Place in time to have a spinach crepe. I have commented on the food previously. While on the whole I like the atmosphere, and the service, I find the crepes to be pretty basic, but they are filling, and obviously not my primary goal on this night.

I do like being in this tiny venue with two of my fave bands. I see all the members of Potty Mouth and Skating Polly strolling around, at the merch table, having dinner, etc. I do actually chat with Abby from Potty Mouth a bit at the merch table. I picked up a CD of the EP (which I already have on itunes) just to have something physical. They are also selling pillow cases, hand screened by Victoria, with a cute dog and the words “Potty Mouth”. They are only $5 ea., so I pick up a matching set on a blue/white polka dot fabric.

Abby said they have a new record coming out in 2019, which I was glad to hear. I know they have a bunch of new songs from the last few years that are in their live show, but are yet to be released. She asks if I’ve seen Skating Polly. I told her that I had, and I had also seen Potty Mouth, which she found surprising. Anyway, she was super nice. I feel invested in Potty Mouth – I really want them to be commercially successful, but I fear they will not be. It doesn’t seem like grungy rock and roll has more than a niche audience any more, which is lame… Anyway, on to the musical part of the evening!

The first band is The Shoobies. They are a 3-piece retro rock band from LA. They have some visual props – old phone handsets rigged up as microphones that distort the vocals. There are also a couple of tv sets with oscilloscope-like patterns which is kind of cool. The Shoobies are actually really good. The guitar player is fiery. I love the drummer, too, his playing is tasteful and economical. They have a 60s kind of feel, but re-imagined for the 21st century. They have a propulsive energy and the songs have interesting jams, unfolding musically in exciting ways. There are some cute girls dancing up in the front – looks like they brought some fans/girlfriends with them from LA. There’s an older couple standing next to me in the back, the husband is filming a lot of the set. I exchanged a few words with them after the show, they turn out to be the drummer’s parents, which was sweet.

Potty Mouth takes the stage next. Normally these girls are sporting thrift store glam outfits of fake fur and glitter, but they are more casual tonight, in slacks and t-shirts. Only the lead guitar player is wearing a dress. Victoria the drummer is in her classic skater chic, a black track suit and ball cap. I really have a soft spot for Potty Mouth – there is something vulnerable and un-contrived about them. They really want to make it as a band – and I do, too. I listened to a podcast about how they moved from Massachusetts to Los Angeles, where they survive on food stamps, to make their dreams reality.

Fittingly, the opening number “Smash Hit” is about the capriciousness of the music industry:

They have a lot of new songs from the last couple years that have not been released. Many of them make it into their 8-song set. Familiar numbers include killer versions of Creeper Weed as well as Cherry Picking. The sound in the Crêpe Place was not great, but it was great to see Potty Mouth rocking out in my home town.

Skating Polly tours constantly, and this would be my fourth show since June of 2017. I love this band, and it makes me happy just to see them play. As always, they mix things up a bit. Song six is something quirky I don’t recognize, and when it’s over Kelli says it was a cover of the Shaggs. Just now I looked up the Shaggs on Youtube, and holy fuck, what a weird band, and what funny choice of material! Here’s the full set list.

It felt like tonight was the bar band side of Skating Polly – loose and a little raucous. Towards the end of the set Kelli and Peyton switch instruments. Kelli joked “I’m not sure I can play this song on guitar”. The song turned out to be Hail Mary, and of course she could play it on guitar. Hail Mary is one of my favorite live songs, and it was missing from the last two shows, so I was glad they played it tonight. And the final song, featuring Kurtis on guitar, was They’re Cheap (I’m Free).

There was no encore. After the music ended, the musicians put away their gear, the crowd dissipated or went back to their drinks and conversations. I headed back to my car in the cool Santa Cruz night, batteries recharged. 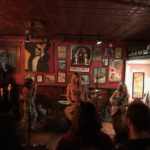 Potty Mouth at the Crêpe Place 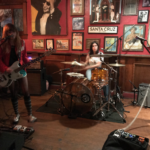 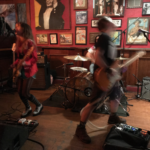 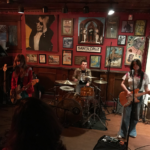 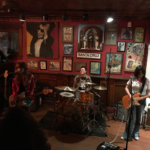