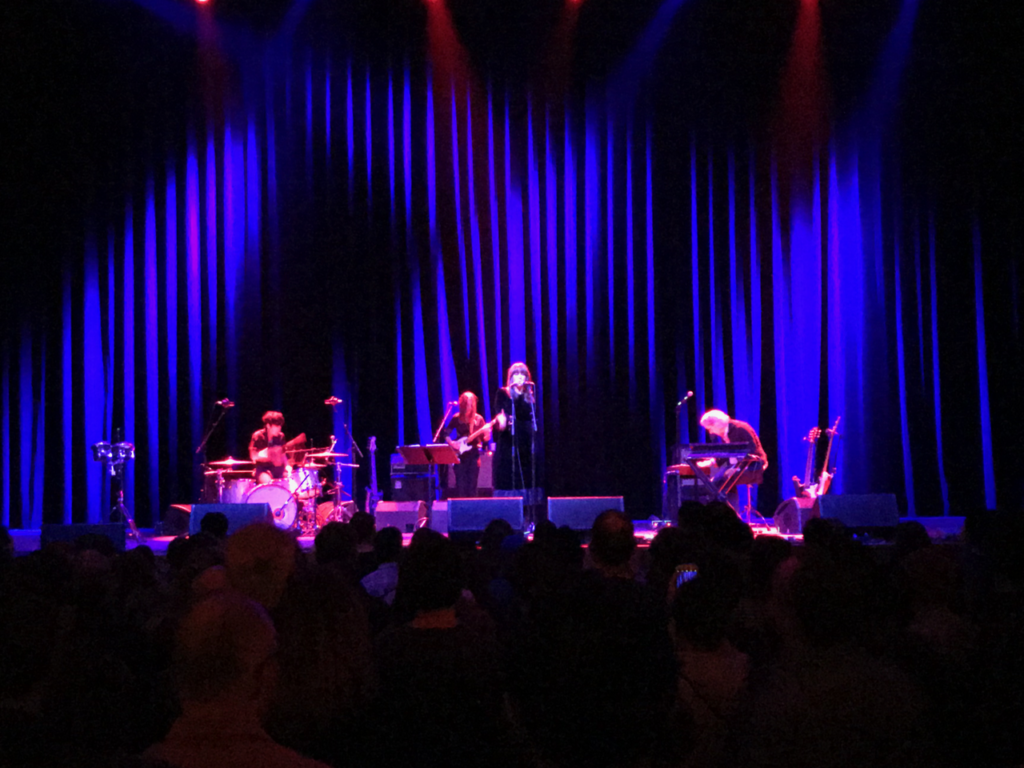 Cat Power at the Fox Theater

This is my review of Cat Power at the Fox Theater in Oakland. The date of the show was November 20, 2018. My cousin Terry joined me this evening.

The support act was Arsun. About halfway through the set, the singer spelled it out for us “A-R-S-U-N.” Terry commented to me, maybe when you pick your band name, go for something that you don’t have to spell, LOL. Anyway, enough with the snark. Arsun were a 3-piece band from NYC. Lead singer was vaguely Tom Petty looking dude with long dirty blond hair and a slightly haunted expression. The bassist and lead guitar player had short dark hair. Lead guitar player was quite tall and handsome. They had a good sound, and I thought the vocalist had a good voice, and put some emotion into his singing. Ultimately Terry and I both felt that their song-writing did not live up to their promise. The songs were slow, and kind of dark, with lots of references to drug use, failed romances and the like. But I felt there were a lot of obvious and slightly cringeworthy lines/rhymes, and they often fell back on the device of repeating a line over and over again with increasing fervor. But they were sincere, and the audience gave them a warm reception.

Terry and I talked for about 30 minutes while we waited for Cat Power to come on. We had ideal viewing spots at the rail nearest to the stage. So we were slightly elevated and had a clear view, while still being quite close. I studied the great gilt god figures that loomed on either side of the stage. I imagined a fantasy movie scenario in which the two statues somehow became animated and broke free from their frozen state. The audience would run screaming as they lumbered about, picking up humans like toys and crushing them …

The band took the stage, lights came down, and Chan appeared. She wore a long black velvet sort of tunic. This was my second Cat Power show, the first being a solo date at the Rio Theater in Santa Cruz about a year and a half ago. This was definitely another side of Cat Power from the Rio show. At the Rio Chan performed solo, accompanying herself on piano or guitar, and the songs were dark, moody, and slow as valium. Tonight we had Chan fronting a band (drums, guitar, bass/keys) and the feel was more upbeat and rocked out. She held a stick of incense which could be seen glowing as she moved her hands. I was really in love with how she moved. It was a strange tension between graceful and awkward. But mostly graceful.

I forgot my notebook, and honestly it was freeing just to enjoy the concert, and not try to write down key points. She opened with something from Moon Pix that I recognized, which was bonus. I recognized a couple songs from Moon Pix and Sun, which are the two I know pretty well, and then several from the new album The Wanderer which I have had for a couple weeks and am liking a lot. A high point was Cross Bones Style from Moon Pix.

The band was killer, very tight yet supple musically. Overall the show was surprisingly rocking. A lot of the numbers were really pumped up compared to the studio versions, but in a very satisfying way. Marshall used the whole stage as she performed, swaying her hips and moving her arms expressively – Earth Mother, I thought. And of course Chan’s voice, smoky, expressive with a quality that cuts to the bone, is what stayed with me most. Folks, if you get a chance to see Cat Power, don’t pass it up. For my money, this was definitely one of the most memorable shows of 2018.