Here is my review of a show I saw back in June. First band is Winter, led by bubbly Brazilian American Samira Winter. She is wearing a sparkly clingy top, a tie dye skirt and is playing a paisley strat. I really liked this band – they had a great psychedelic, shoegaze kind of sound. The songs were good, and had some landscape to them, as our old friend Michael Leary used to say. They are having a good time, and I would be happy to see this band again anytime. I sprang for their cassette Ethereality which I have been enjoying.

YouTube in its wisdom has decided I should be interested in Anna Burch, who is second on the bill. Her new video keeps popping up in my suggestions. I did watch the video for Tea Soaked Letter, which I thought was nicely produced, but kind of basic really. On stage Anna and band are all kind of awkward in a sweet way. My favorite song is Asking 4 a Friend, which she said was a song about “dating your drug dealer.” It’s a little grittier and more “Detroit” than some of the prettier stuff. They are having a good time. The bass player is a doll and has a big smile on her face for the entire show.

The club, which is not very big is not sold out for Speedy Ortiz, but it’s pretty darned full. They are playing Stereolab in between sets, which makes me happy. This was my fifth Speedy Ortiz show, which is a lot for me.

When people ask me about Speedy Ortiz – in my imaginary life where people talk to me about bands I like – I hear myself telling people that Speedy Ortiz are really really good, but I tend to prefer bands that are more emotionally raw. And I guess in a way it’s true my jam is bands that are a little more “unhinged” like Skating Polly or Joanna Gruesome. But having said that about Speedy’s comparative restraint, I have come to appreciate that the feelings informing Sadie’s compositions are quite powerful indeed. I think it may have taken me all these years of listening to their music to fully appreciate that. Anyway, I just want to say that there are strong emotions in Speedy Ortiz’ music, even if there are no visible scars.

Of the five Speedy Ortiz performances I have seen so far this was the overall best and most rocking one I’ve attended. Sadie’s clear voice had a little edge of hoarseness, which lent some additional grit. Backing vocals by bassist Audrey Zee Whitesides and drummer Mike Falcone were also excellent. I am a huge fan of Falcone’s drumming and the distracted professorial energy he brings. The band is really in sync and playing well together. Many of the songs are full-on raging, from opener Buck Me Off, Plough off of Major Arcana, and Ginger from Foil Deer, among others.

The set ended with crowd-pleasers Tiger Tank and No Below. Apparently No Below was featured in a video game. Sadie was sure half the audience was here for that song, but we were all clueless. She said “we’re not going to come back for an encore, so this is it” and launched into one I didn’t recognize, but it was great and had something to do with ‘too many boyfriends.’ Later I searched the lyrics and realized it was Taylor Swift from way back in 2012 (see video above!). Here’s the whole set list, as best as I could make it out: 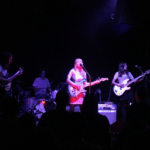 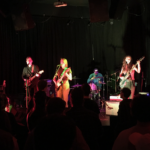 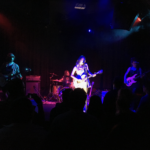 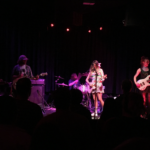