The Rock and Roll show is sacred space. All is sacred.

I apologize, dear readers, for the large gaps in my scintillating concert reviews, as well as my inability to get my thoughts down on paper while the memory of the show is still fresh. Nevertheless, I am committed to writing a review of every show I attend. Perhaps it can be made a kind of virtue, I mean, I remember concerts that I saw years and decades ago – not in detail to be sure – but I remember the impact the performance had on me.

I was really excited about seeing Snail Mail, to be sure. I feel a little sheepish about jumping on the bandwagon of the NYT and everybody gushing over this HS senior with her wise-beyond-her-years persona and her virtuoso guitar-playing. But holy fuck Lindsey Jordan is super talented and intelligent, and who doesn’t want to see this prodigy in the early phase of what will hopefully be a long and fruitful career?

First band was Club Night from Oakland. They were a noisy prog rock outfit. Their music was intense and at times unsettling, but I thought they were talented and played with conviction. My notes ‘intense … King Crimson-esque … tapping … many notes.’ The lead guitar player was quite talented, and although they weren’t exactly my cup of tea I appreciated them.

Next up were folk rockers Bonny Doon. (The members have not actually been to Bonny Doon, which is near where I live in the Santa Cruz Mountains.) The members got ready to play their set – drums, and two guitar players. A short blond woman stepped onto the stage and grinned at the audience – the bass player. I thought to myself ‘she looks a lot like Lindsey Jordan’ but I thought it was just a coincidence. However, it became obvious after the fact that Lindsey Jordan was in fact filling in on bass and backup vox with Bonny Doon, which was cool. Everybody had French braids (except the drummer), which was also cool.

Alex and I both like Bonny Doon’s set. They had a kind of country rock, Americana sound – a sort of comfortable, breezy and strummy feel that was easy to relate to. They had a warm stage presence and it was a totally enjoyable set.

And then it was time for Snail Mail. I had been looking forward to this show for a long time, and Snail Mail did not disappoint. Lindsey returned to the stage having traded in the bass in for her usual Jaguar (?) 6-string. She had a confident and kind of brash presence – I guess she must be used to performing for people who are older than her. There was a noisy intro which segued into Heat Wave off her new album Lush and the set was underway.

I guess people have been talking about her singing, and for good reason. I mean, Lindsey’s guitar-playing is kind of the gateway drug with Snail Mail, but Lindsey writes great songs, and she sings them with 110% conviction. There a very raw quality in her voice, like it’s beaming right from her soul. And you can understanding every fucking word which is bonus.

The only qualm I have about Snail Mail is that they don’t really seem like a band. Lindsey is very clear that Snail Mail is her project. The other musicians seem very much the side men. Although they were all excellent musicians the drummer is the only one that seems to have any chemistry with Jordan. I guess maybe that’s just what works best for her, but I fantasize about a future version where Lindsey finds true collaborators.

But what the fuck, Jordan is on fire and it’s a joy to watch her perform! I love her guitar playing – there’s a really assertive quality about – jangly, ringing, and totally inventive. The songs are interesting, too. There were barn burners like Pristine and Static buzz, along with hauntingly pretty numbers like Let’s Find an Out. Before the encore she played two solo numbers that were super pretty.
Anyway, the set list I captured was: 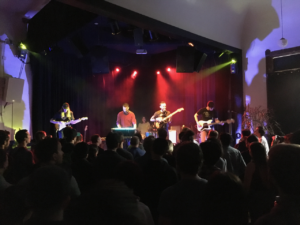 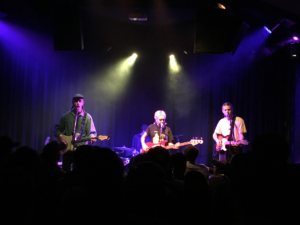