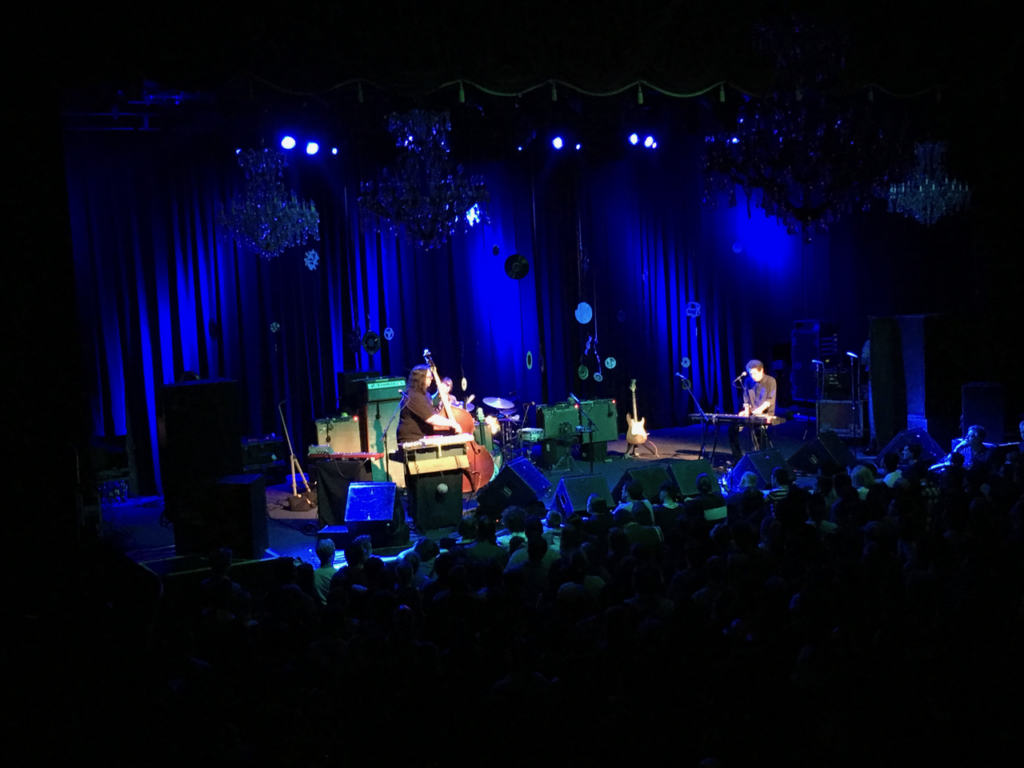 Yo La Tengo at the Fillmore

Since starting this blog, I’ve felt an increased desire to fill in some of the many huge gaps in my rock and roll knowledge. Like anyone, I tend to listen to what I listen to, so to speak, and add new discoveries based on stuff I find on the internet, bands that are touring with another band I like, and so on. Occasionally I’ll get turned on to a band that has been around for a really long time and making really awesome music and I’m late to the party. In the case of Yo La Tengo, I’m something like 35 years late to the party. But better late than never!

I had been aware of the existence of a band called Yo La Tengo for some time, but had never listened to them. At some point, for reasons I know longer remember, I added Today is the Day to my YouTube “Watch Later” playlist, and possibly even listened to it. More recently, one or two YLT songs popped up in my Spotify playlist radio. More time went by, and then many months ago I saw that they were coming to the Fillmore in June. I bought tickets.

I knew that if I was going to get the most out of the show, I should try to familiarize myself with their music. This is a rather daunting task, given their countless albums, and well known reputation for drawing upon an immense catalog of obscure covers during their performances. So I did what I could. I will say Spotify has a pretty terrific playlist of 50 essential YLT songs which I listened a number of times…

The day of the show arrived, and I motored up to SF from the South Bay, and parked at the Japan Center lot. I arrived well before the doors, so I walked up Fillmore St. and bought a cup of coffee. I strolled for a few more minutes, then made my way to the venue. Much to my surprise, I was 1st in line to the show, which hasn’t happened in a long time. The next two guys to show up were long time fans, with many YLT shows under their belts. My buddy Alex showed up after a while (Alex knew virtually nothing about YLT). Thanks to our early arrival time, we sailed through security, said ‘hi’ to top hat girl and grabbed a couple of apples on our way up to the balcony. We scored the most advantageous table in the balcony that was not reserved, which is where we spent the whole show.

The YLT lineup, which has remained more or less the same since 1992, consists of Ira Kaplan, Georgia Hubley and James McNew. They are all multi instrumentalists, but Georgia mostly plays drums and sings, Ira plays guitar and sings, and James plays keyboards, electric and upright bass, and guitar. James did sing in a reedy tenor on several songs, as well. They moved through their instrument and song changes as if following an inner choreography which was almost as fun to watch as it was to listen to. And yet they are completely unpretentious, which I think is one of the most refreshing things about this band.

Musically there is so much to listen to. There were trippy space jams, sweet love songs, beautiful harmonies and chaotic, lengthy feedback fests. I can see how each YLT concert would be a unique moment in time that they are creating with reverence and bravado understatement.

Overall there is a genuine sweetness in YLT’s music. There is an intensity, too, in some of the noisier jams, but I think the warmth and sweetness of this trio is the over-arching feeling. Most of their songs are love songs – usually about loss or unrequited love. There are a smattering of numbers about random things – baseball, motorcycles, movies, etc. There are no songs about politics which I find interesting. The complete lack of reference to the state of the world, oppression, etc., seems remarkable, and it seems like a conscious decision. It means YLT space is maybe a place of refuge from that aspect of reality.

The first set consisted of 10 songs, and they were mostly slow and sweet. The second set, consisting of another 10 songs, was considerably more raucous, with many extended noisy solos. For the encore they brought out Calexico, fresh from their performance at GAMH. Calexico is a Tex-Mex band and they contributed a horn section and accordion to the instrumentation. There were 3 songs in the encore, ending with Comin’ Back to Me by Jefferson Airplane (one I actually recognize).

I stopped at the merch booth and picked up Extra Painful on vinyl for the heart-stopping price of $40. This is the “Limited deluxe 21st-Anniversary edition of the 1993 classic Painful” with 10 unreleased tracks, etc. If your a YLT noob like me, I can recommend this as a good starting point, as well as 1997’s I Can Hear The Heart Beating As One, which Stereogum (and many others) recommend as “the pinnacle in the story of Yo La Tengo”.

So what are you waiting for? How will you discover some new, or “new to you” music today?