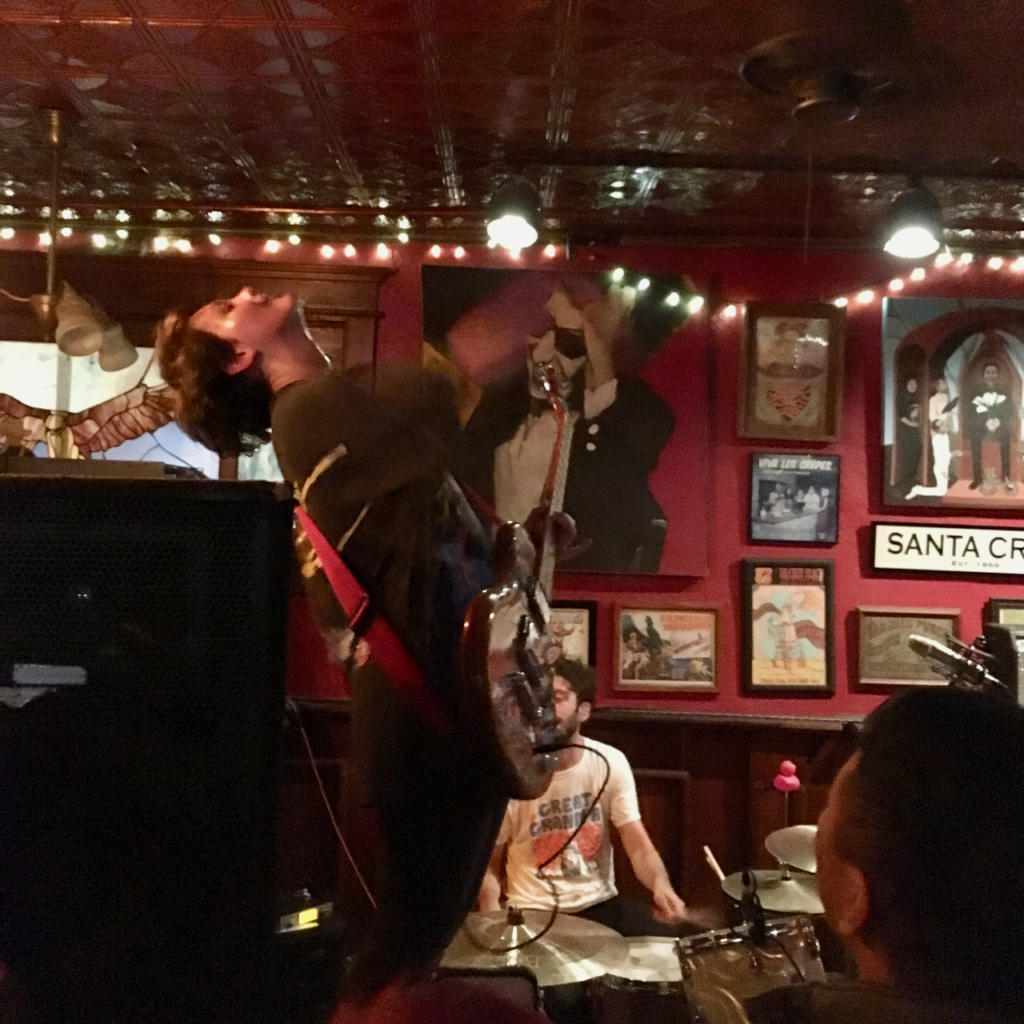 Diet Cig at the Crepe Place

Gawd, writing about music is so fucking hard. Why do I even try? Because I am passionate about it. I want to communicate that burning essence of being squished together with my fellow humans, watching other humans on a stage make loud electrified music with their voices, guitars, drums and maybe a keyboard. Why do thousands of girls and boys skip out of pottery studios, philosophy lectures and barista jobs to drive around the country in a van with bald tires and a rusty muffler, playing to tiny crowds in cramped bars, making no money, with no hope of commercial success? And yet, was there ever an art form so intoxicating, so immediate? Rock and roll can lift me out of life’s day-to-day struggles, disappointments and failures. Rock and roll can fill me with joy and ecstasy like few other things. Rock and roll is my religion, and venues are my church.

The Crépe Place in Santa Cruz is one of the smaller and more intimate houses of worship I’ve been to. I arrived about 15 minutes before my son and his friend who were joining me. The drums and amps were crammed into 9×12 area to the right of the door, opposite the bar. The bar is decorated with tons of nostalgic paraphernalia and old movie posters like “Marihuana – Weed With Roots In Hell!”. The kids arrived, and in about 15 minutes we were seated at a table in the large outside garden area. We had chamomile tea, mozzarella sticks, and crepes. The food was satisfying, but hardly inspired. But the funky patio environment more than made up for it. The members of Diet Cig and some friends were there at another table, which was kind of cool.

A little after 9pm we made our way back to the bar area, and slipped into a spot about 12 feet from the performers. Eve’s Peach from San Jose were the opening act. They consist of Nikki (on guitar), Steven (drums) and Amy (bass). I did not connect with this band at all. About halfway through their set drummer Steven and the guitar player switched instruments for two songs. They were much better, I thought, in this configuration. Steven’s guitar playing was a little more riffy and unpredictable. They switched back for the last 3 songs, and then they were done.

Diet Cig are Alex Luciano on guitar/vocals and Noah Bowman on drums. They released an EP in 2015 called Over Easy, and their new full-length is titled I Swear I’m Good At This. And, in fact, they are brilliant, sweet and snarky all at once. I kinda feel like the rock and roll duo is an archetypal, but tricky configuration. It’s the most minimal combination you can have that is still legitimately rock and roll. Like if you were to take something already as essential as the Ramones, and then boil it down further, add a Peter Pan-like front-person – you would get Diet Cig.

I was glad to be close to the stage when Alex Luciano picked up her guitar and stepped up to sing. She is not very tall. But what Alex lacks in stature she more than makes up for in bouncy, radiant energy. Their set began with Sixteen, a song about many messed up things that can happen in high school sex and romance. Alex has a message for the audience, too, which is important. She was very clear that she wanted folks to be safe and have fun at the show – in a consensual way – thank you very much. In a later pause between songs she said wanted to encourage, women, POC, non-binary, queer, etc. people to make music and art. (No offense to all the cis-het white males in bands, but maybe there’s enough of you already.) At one point she made us all repeat “I will not water myself down for anyone!” You know, not everybody can pull that shit off, but I was 100% yelling “I will not water myself down for anyone!” at the top of my lungs. Thank you.

Their music is formed from simple elements, but combined in a way which is expressive and inventive. Alex’s guitar sound is perfect like a dirty martini – shaken and not stirred. Just the right amount of distortion. There are softer, slower parts, followed by quick tempo changes and angsty blasts of guitar and percussion. Luciano’s lyrics are also the stuff of genius, wringing poignancy and humor from cringeworthy situations and encounters.

A word about Noah’s drumming. There seemed to be nothing complex or flashy about it – but man he really hits hard! Like he really has a point to get across. Anyway, it really works for me. But the main thing about Diet Cig is the infectious joy they put into their music. Alex jumps around, on top of the drums, speakers or whatever is handy, then jumps down, rolls around on the floor, etc., while strumming. She played while walking through the crowd. Favorites included Apricots, Maid of the Mist, and Tummy Ache (“it’s hard to be a punk while wearing a skirt”). They closed with super snarky Harvard and Alex banging out the final chords from on top of a table on the opposite side of the room from the stage area. There was no encore nor was one really needed after the preceding performance. By all means, get out there and support Diet Cig any chance you get, for they are spreading love and rock and roll wherever they go.