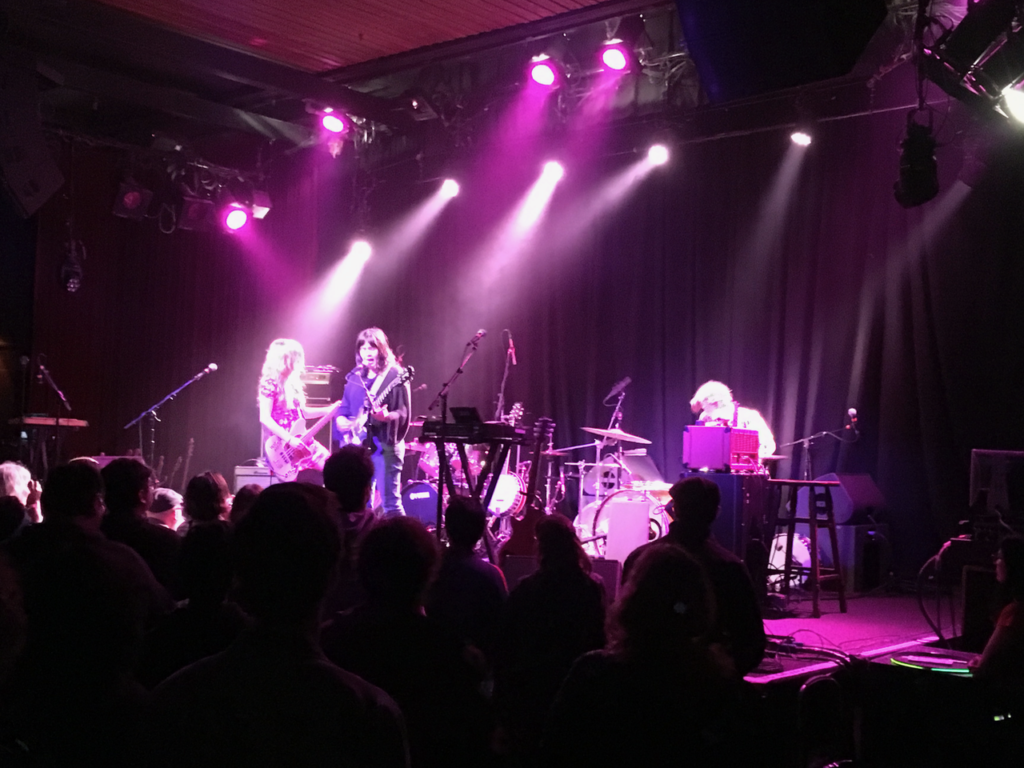 Skating Polly at the Independent

I have decided that May is going to be blog every day month!!! I am not going to post every day, but I am going to write for 30-45 minutes daily and see how that goes. So tonight I have to attend to my concert review backlog. I saw The Go! Team, supported by my faves and yours, Skating Polly back at the end of March. My impressions will be colored somewhat by the passage of time, but I do have my scribbled notes to jog my memory.

I’ve seen quite a few excellent shows at the Independent in recent months, most notably Mary Timony plays Helium which was definitely one for the ages, but that’s another blog. I was able to roust my buddy Alex to join me in SF on a week night to see some music, which was good. We went to 4505 Burgers and BBQ for dinner at my urging – the memory of that sublime pulled pork sandwich was calling me back for another taste. My selection was not quite as stellar as the last time, but still good. We still had some time to kill, so we grabbed a coffee at Bean Bag cafe, then headed to the venue.

We sat in the raised seating on the right side of club, same general location as our last visit to the Independent. We had plenty of time to chat and sip our beverages, as more people filtered in to the venue, and show time approached. Finally the lights went down and Skating Polly took the stage. Skating Polly consists of stepsisters Kelli Mayo on bass and vocals and Peyton Bighorse on guitar and vocals. Kelli’s brother Kurtis now seems to be a permanent member of the band, on drums and sometimes guitar. Kelli was on the left of the stage, farthest from us, wearing a fuchsia print dress. Peyton wore jeans and a dark knit top. Kurtis on drums, partially obscured by Go! Team’s equipment, was wearing a button down shirt with a bold print pattern.

This was my third Skating Polly show, and possibly the best yet. I feel like there must be a certain freedom in being the supporting act. Half the audience may not have even heard of you, so you don’t have to worry so much about what people’s expectations might be. You don’t have to do a lot of small talk, or play an encore. You can just play the set you want, and whatever applause you get is truly earned. So they just tore into a 10 song set-list that was larded with their best numbers (which is kind of ridiculous cuz all their songs are the best). It seemed to me the older songs had been tweaked just a little – I don’t have a musical education, but my guess is they added some swing for a slightly different feeling. Mind you, it wasn’t some weirdo versions of the songs, which I would have hated, but just a little twist, which probably made it a little more fun for the band as well. They played many of my favorites, though no Hail Mary which was a little sad. They played three songs off their upcoming album The Make It All Show: Free Will at Ease, Queen for a Day and They’re Cheap. Here is the set list:

Incredibly, Peyton and Kelli have been playing together for 9 years, and it shows. They are confident and relaxed, yet they’re still gritty as fuck. Peyton really brought it vocally, and unleashed herself on Louder in Outer Space and other faves like Oddie Moore and Nothing More Than a Body. For the last two numbers, Peyton and Kurtis switched places, and Kurtis treated us to his blazing guitar work.

Skating Polly are touring on the South and East Coast with Charly Bliss or Pottymouth, two more killer bands. So what are you waiting for? 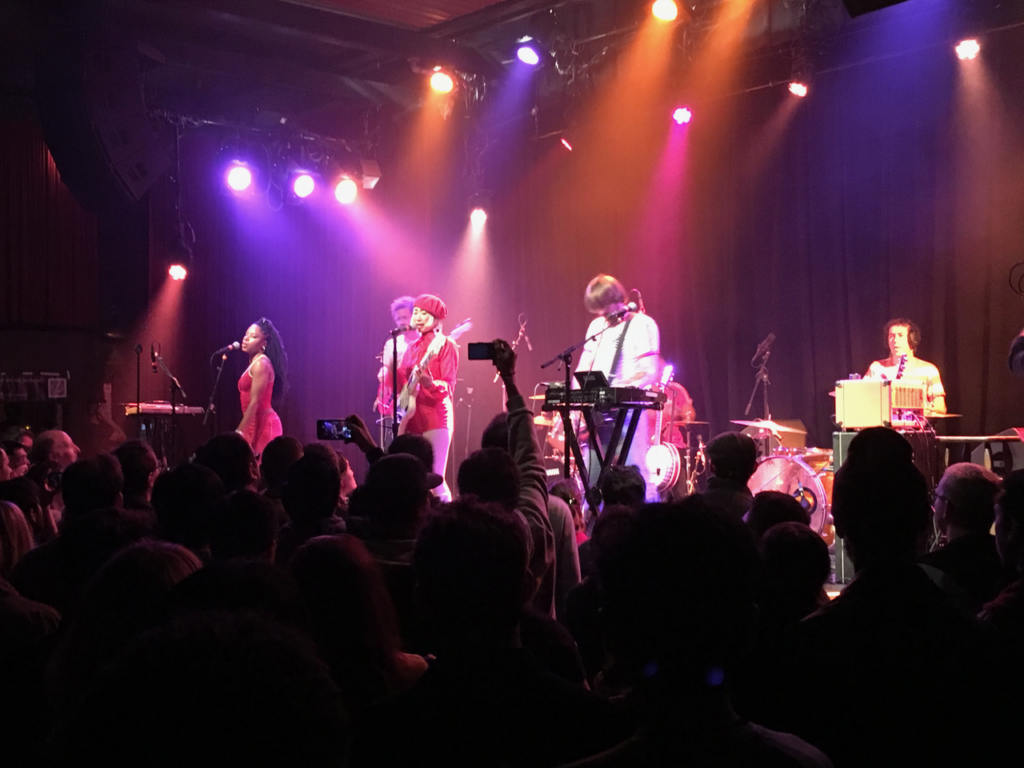 The Go! Team at the Independent

I knew next to nothing about headliners Go! Team. I looked at a couple of YouTube videos and was not all that moved, but many bands are more compelling in person. That proved to be case with Go! Team. The Go! Team are Ian Parton (guitar, vocals), Ninja (vocals), Sam Dook (guitars, drums), Simone Odaranile (drum), Angela Won-Yin Mak (vocals, keyboard, guitars), and Adam Hutchison (bass). They hail from Brighton, England.

They put on a great show. There was a lot going on, with a big funky sound that had hints of Sly and the Family Stone and CSS. It was like putting R&B, world beat and punk in a blender. Singer Ninja took command visually, and vocally, on most of the songs. She had a very positive vibe, and an infectious warmth as she sang, rapped and danced on the stage. Angela Won-Yin Mak, who I nicknamed beret girl, also sang lead on a number of songs. Angela had more of a bubblegum pop voice, which was fun and was a counterpoint to Ninja’s bigger sound. The rest of the band totally rocked, too. Simone Odaranile on drums was a force of nature, and she was sometimes joined on drums by Sam Dook who traded off between guitar and drums. Guitarist Ian Parton and bassist Adam Hutchison were also pumped up, and helped propel the songs. All in all it was a high energy show that was tight, but really rocked. I picked up their new CD Semi Circle which is quite good – though perhaps not as compelling as the live show. But their set had me swaying and whooping until the last song. Would recommend!