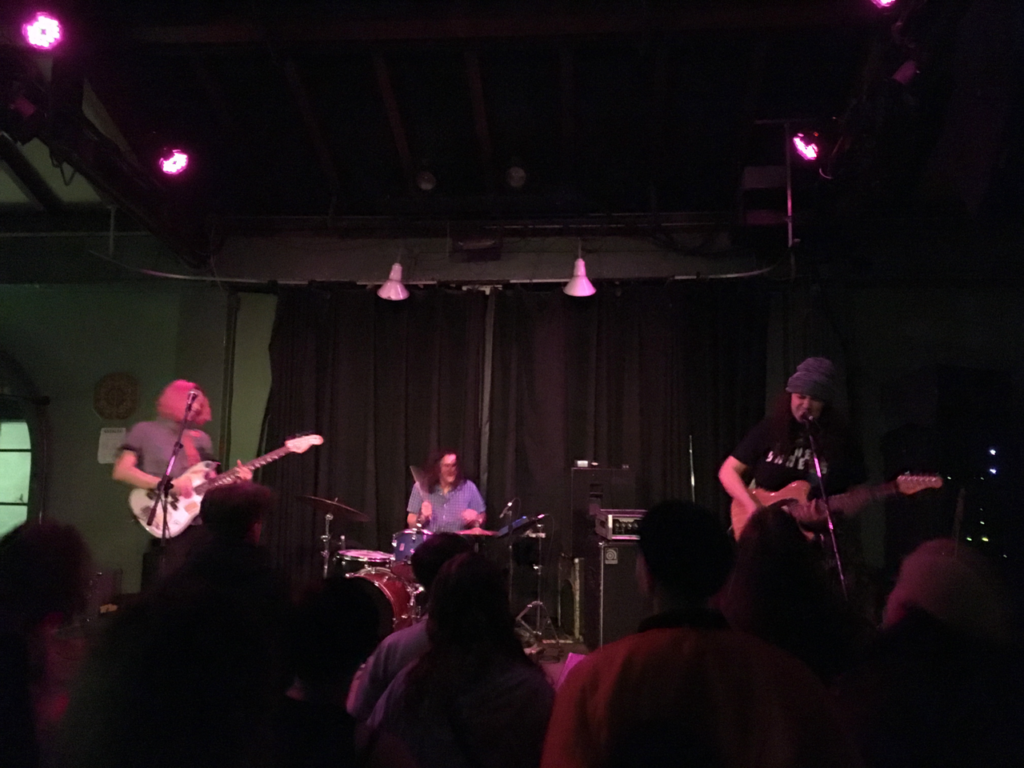 Palehound Rocking Out at the Catalyst

I arrived at the Club, and locals openers Gal Pal were in full swing. Their Bandcamp page describes them as “queer femme garage friends”. They were young punk rockers and I warmed up to them quickly. Gal Pal were loud, and rocked hard, but many of the songs were also musically audacious, with interesting transitions, changes and a sense of drama. Gal Pal was having a good time, feeding off each other’s energy and powering some intense jams. Several of the members contributed vocally and they were not afraid to go for it, delve into the darkness, and bare their souls. All in all a very strong set, and I picked up a cassette of their album Girlish for the archives.

Next up were the Weaves. Fronted by vocalist Jasmyn Burke, the Weaves hail from Toronto, Canada according to Wikipedia. But before they actually played, there was an embarrassingly long period while the members of the Weaves worked with the sound guy. Apparently they were not happy with their monitors, because they kept check-one-two-ing, and banging, and strumming, and signalling ‘more (whatver) in the monitor’ for a long time. And yet when they performed they were still visibly unsatisfied with the acoustics. I will say that I did not connect with the Weaves. They were cute, and having a good time, which counts for a lot. I mean, they were good musicians, and Burke can really sing, despite having kind of a funny voice (kinda like Betty Boop, but not that funny). They were at their best when they went kind of raw and punk. Other moments just seemed indulgent – guitarist playing with his face, Burke moaning, goes on and on, whatever. But they rocked, and gave it all they had, and I certainly appreciated them for that. But they were not my cup of tea.

And then Palehound came on and they were awesome. Palehound are a Boston, MA band consisting of Ellen Kempner on guitar and vocals, Larz Brogan on bass and Jesse Weiss on drums. I’m pretty sure Sadie Dupuis of Speedy Ortiz put Palehound on my radar. I learned from my pre-show research that Sadie and Ellen met at music camp, where Sadie was a counselor. I got the impression that Kempner, despite being a powerful performer, has mixed feelings about being the center of attention, with the added scrutiny that a young, queer woman fronting a band attracts. But the intimate crowd at the Atrium was heavily queer and young, and Kempner expressed her appreciation, and gave a shout out to Gal Pal.

Palehound put on a performance that satisfied me in every respect. They played most of the songs from 2017’s A Place I’ll Always Go as well as selections from 2015’s Dry Food and 2013’s Pet Carrot. Kempner is a fiery guitar player, effortlessly jumping from delicate finger-picking, to power chords, to tasteful leads. Brogan and Weiss provided a punchy rhythm section to Kempner’s compositions. Kempner’s songs talk about love and loss, but also dissect the everyday moments that bind us together as humans – grocery stores, pet food, donuts – with a wistful and even aching feeling. Friday’s set was beautifully paced between pretty, wistful songs and punk-edged rockers. And when Palehound rocked, they really rocked, and lord knows, that’s what brings this geezer out to the clubs at my advanced age.

Definitely check Palehound out if they’re coming to your town!