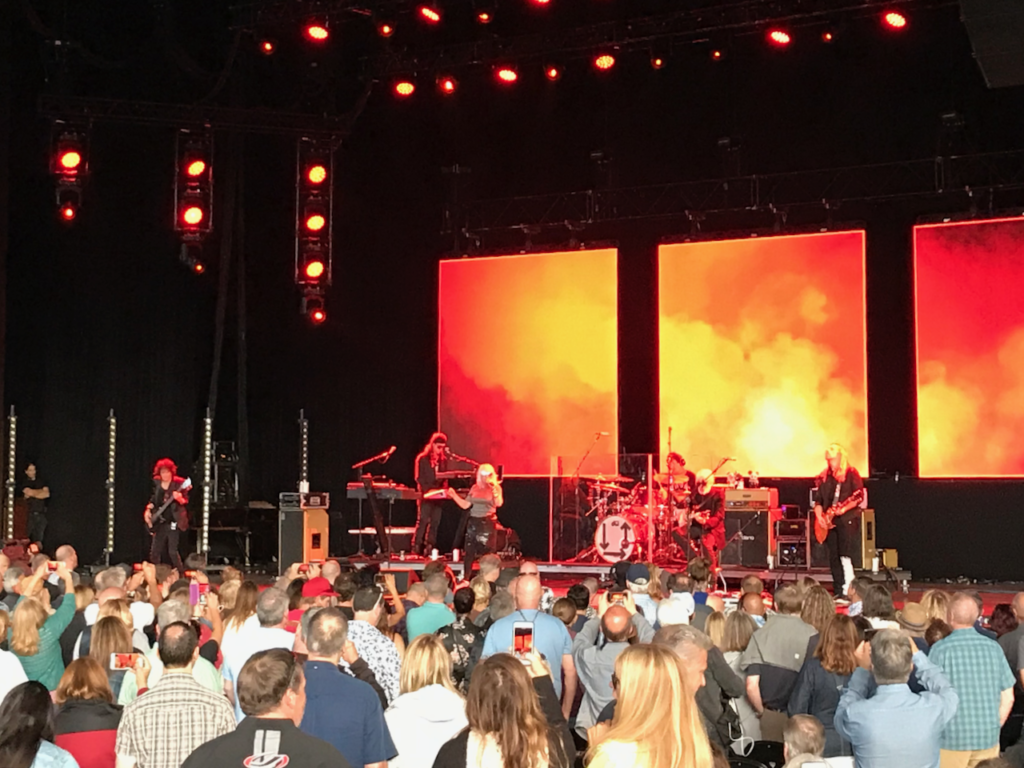 Today’s review is Elvis Costello and Blondie at the Concord Pavillion. The occasion was my cousin Terry’s birthday. I probably wouldn’t have made the trek up to Concord for an arena-type show if Terry hadn’t invited me, but I was definitely down for it.

I guess I’m thinking about nostalgia and how we relate to music as we get older. I mean, you’re not hoping to be surprised when you see a couple of artists you listened to in high school or college – and now you’re in your 60’s. At the same time, if I see an act that’s been around for decades, I don’t want a tired performance of their greatest hits – I want to feel like they’re having fun, maybe they have a new album out, and do a few interesting covers or whatever. I am pleased to report that this performance hit all those bases.

Terry and I got to the venue around 5:30pm, before things got too crowded. Parking and getting in were easy. We got burgers and fries at the concession stand and went to find our seats. We were in the semicircular zone behind the orchestra. We were pretty close to the stage, but we had a little elevation which afforded a decent view.

I was pretty stoked about seeing Blondie. I was a big fan of their music back in the day but never saw them live. I was also a little nervous that they might be over the hill, but I could have put my worries aside.

Debbie Harry was very cute, warm and real. Chris Stein was seated, but great. Newer guitarist Tommy Kessler was also great. I was always a huge fan of drummer Clem Burke. Burke’s solid and tasteful drumming was always a big component of Blondie’s sound. And tonight’s performance was god-like. Besides, um, playing the drums he did all kinds of flashy moves, gesturing with arms extended like Poseidon, tossing his sticks into the air and catching em, and so forth. Bass player Leigh Foxx has been with the band for 20 the last 20 years and is still killing it. Keyboard player Matt Katz-Bohen was also great. Katz-Bohen did a couple of amazing solos on keytar which was fun.

Blondie did not play any of my favorite early, early songs like Look Good in Blue or X Offender. But they played so many great tunes like Sunday Girl, Dreaming, Heart of Glass, Rapture, Call Me, Hanging on the Telephone, a couple new ones – maybe Doom or Destiny, The Tide is High, and Atomic. They covered “Groove Is In the Heart” by Dee Lite. They did a sly political thing which I greatly appreciated – they segued into From Russia with Love while the Presidential seal was projected on the giant screens above. 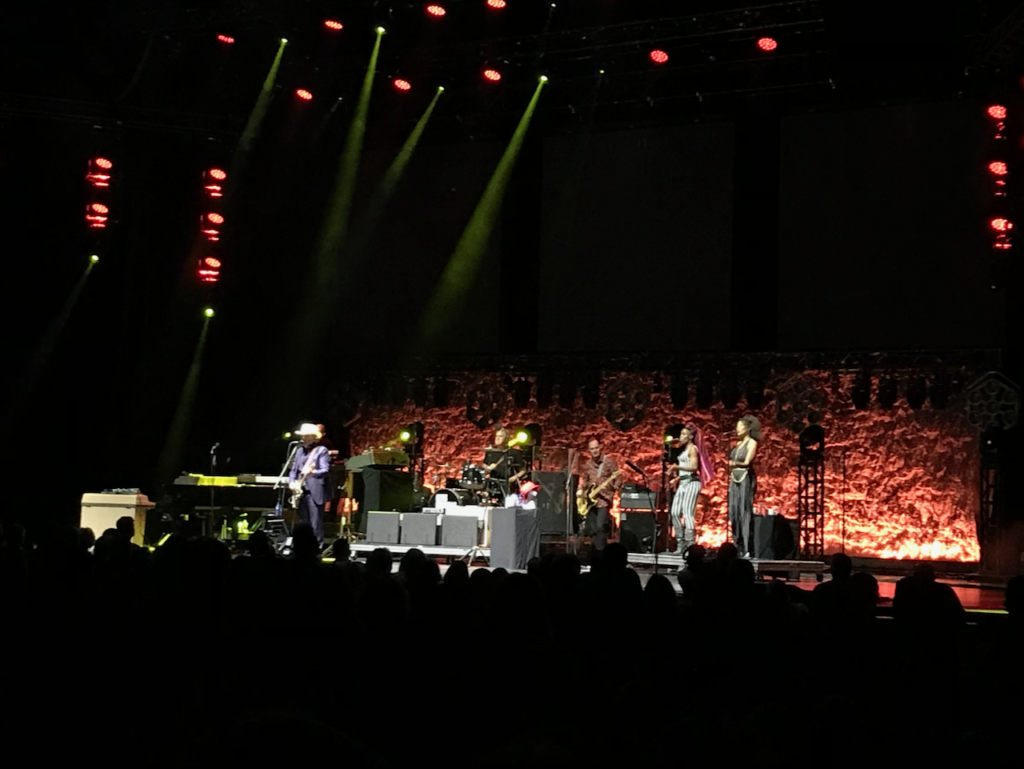 I had less energy around the headliner, Elvis Costello. I mean, I had a couple of his early albums, but I was not as much of an Elvis fan as I was a Blondie fan. Nevertheless Costello and band delivered a fun and completely satisfying set. The lineup consisted of Costello on guitar (of course), bass, keyboards and drums. They had a really big sound for just 4 players. There were also two backup singers, Kitten Kuroi and Briana Lee.

Guess it should not have been a surprise, but Elvis is a fantastic guitar player. I really enjoyed watching his mastery of the instrument. Costello’s set pretty much covered the bases from chronologically as well as stylistically. There were plenty of rocking numbers, as well as ballads. Some of the songs included Pump It Up, Watching the Detectives, Alison, Peace, Love & Understanding, Everyday I Write the Book.

Terry and I both had a great time, which was the main thing, right? Terry, who was more excited about Elvis coming in to the evening, was really impressed with Debby Harry and Blondie. Especially when she Googled Harry and discovered that she’s 73 years old, and still sounds great and full of energy.

See you next time!

1 Response to Elvis Costello and Blondie at Concord Pavillion