Guantanamo Baywatch at the Catalyst Club

Hey, getting behind in my music blogging. Been very busy with work and all kinda other shit. I saw Guantanamo Baywatch about two weeks ago in the Atrium at the Catalyst Club. I have been aware of Guantanamo Baywatch for a year or so, but never had the chance to see them live. Since they were coming to my local joint, and the tickets were $12 at the door, I thought I should do my part to support the arts. It was definitely well worth my while. 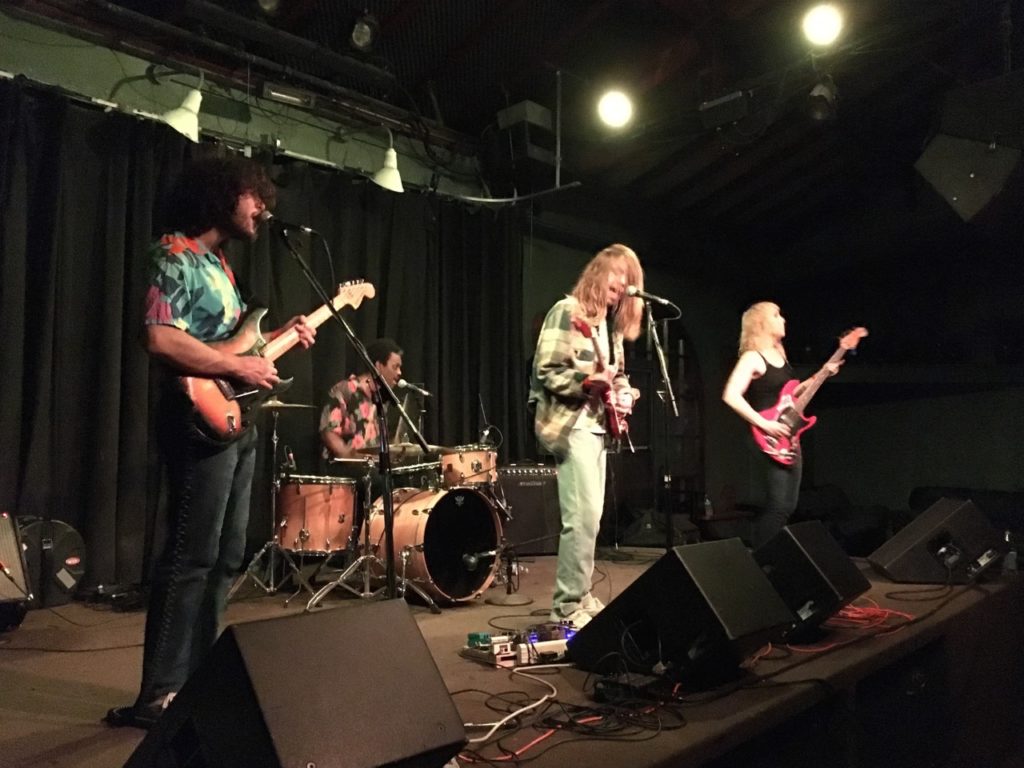 Guantanamo Baywatch at the Catalyst

Having missed openers Speck, I asked some random club patron how the first band was, and his answer was “not a fan!” They had one song, he said, where the main lyric was “society’s fucked!” over and over. As it turned out, random club dude was actually a member of Psychic Astro Club, the second band. “I think the second band will put on a really good show” he said with a wink.

Psychic astro club was a 5-piece band with two guitar players, keyboard, bass and drums. Two of the members had sort of metallic makeup or face paint, adding a kind of 60s vibe. Overall I thought their set was pretty strong. They opened with an instrumental number that reminded me of early Stereolab. I found the drummer to be quite mesmerizing to watch. He had those octopus arms that moved with great fluidity, creating great syncopated rhythms. Their sound is very psychedelic and they lay down some excellent grooves. I appreciated the fact that at least three band members could sing, and they had proper harmonies which is always a plus. I scribbled “The Golden Road to Unlimited Devotion” in my notebook, so I guess they were giving me an early Dead vibe. Overall a very enjoyable set.

I’ve only been to the Atrium a couple times. Especially on a weeknight, it has the somewhat awkward feel of a high school dance. There’s the strange little drinking corral, formed with orange webbing and pylons around the bar area, which was packed with people, and then the no-drink zone which is much larger, with scattered clumps of people. I was glad that by the time Guantanamo Baywatch took the stage the house was pretty full.

Guantanamo Baywatch is a Portland, Oregon-based band composed of core members Jason Powell on vocals and guitar, Chevelle Wiseman on bass, and Christopher Scott on drums. Rounding out their sound on guitar and vocals is Jordan Owen. They play high-energy, punked out surf music which is guaranteed to get your toe tapping, if not lindy hopping frenetically as people were by the end of the set. Some of the notes I scribbled – “Like surf music on mescaline,” “They are so fun to watch!” and “They play with conviction! 110% every song!” So yeah, a great party band. Although Powell is a kook with a cartoon-y voice and Cousin It hair covering his face half the time, he is a true virtuoso on guitar. Wiseman is a badass bass player with rockabilly looks, and Scott is also a wild man, in addition to being a tasteful drummer. Scott also does vocal duties, with some of his numbers consisting of mostly falsetto yawps and yips. I’m sorry, Jordan (Owen), but somebody has to be the straight man. But Owen definitely played an important part filling out the band’s sound.

I’ll leave it there, but it was definitely worth staying up a little late on a work night to check them out.