All the performers on this tour, billed boldly as The Power Convergence, are pushing the boundaries. Electronic noise rock artist EMA was co-headlining with The Blow, a political feminist electronic pop duo from Brooklyn. At each date on the tour, local artists charting new territory were invited (by EMA, it seems) to fill out the bill. 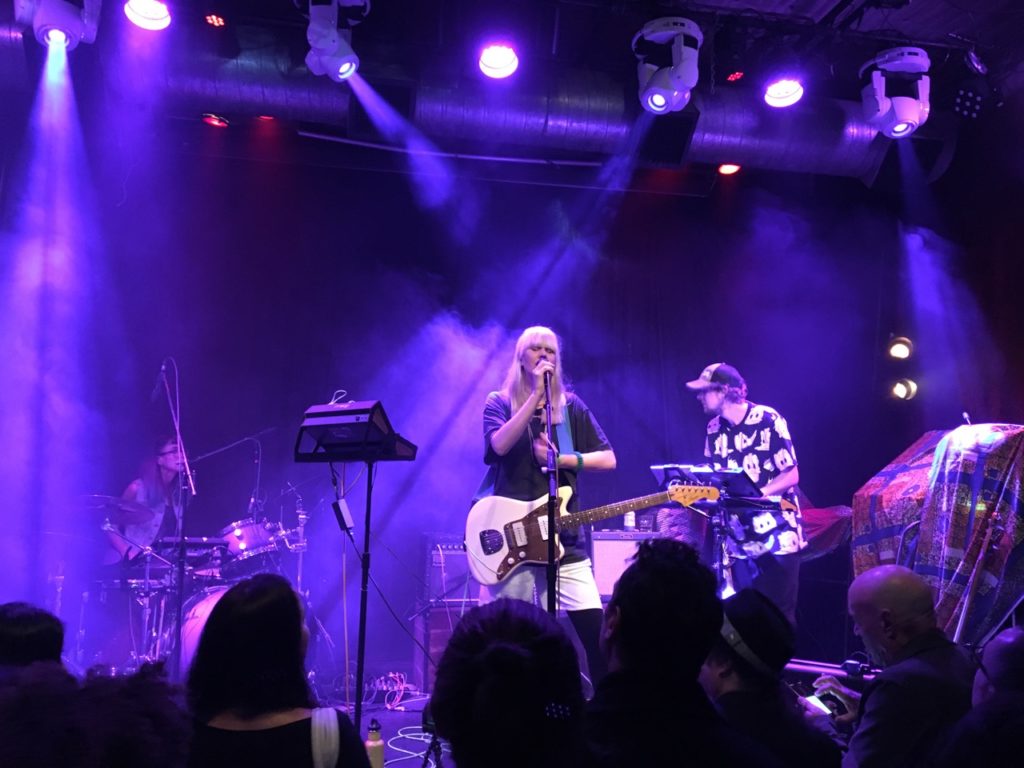 At the Rickshaw Stop last Monday, Ah Mer Ah Su (Star Amerasu) opened the festivities. Star had great energy. As a black trans woman, she clearly knows what it means to be an outsider. Her energy was bubbly and cute, but at the same time challenged us to confront issues like white privilege in songs like Meg Ryan. Accompanying herself with a small electronic toolkit, recorded beats and loops generated on the spot, Ah Mer Ah Su delivered a moving, uplifting, and bittersweet performance.

I had been looking forward to seeing EMA perform for a long time. I heard about EMA in 2014, and bought The Future’s Void, her brilliant second album. I think I just missed that tour, and this was her first proper Bay Area performance in several years. It was a very gritty, intimate and visceral set. Joining EMA for this tour were Susan Lucia on drums, and Leif Shackelford on violin, synthesizer and bass. Leif’s middle finger on his left hand was in a splint, the result of an accident right before start of the tour. He did just fine with the remaining fingers.

EMA is a combination of many contradictory things. Raised in middle America, yet she has the instincts of a futurist. Her songs about the surveillance state in The Future’s Void were released months before Ed Snowden became a public figure. The song Aryan Nation on this year’s Exile in the Outer Ring (written about 2 years ago) seems all too relevant in our current American dystopia. As a performer, EMA is iconic and shamanic, but at the same time down-to-earth and self-effacing.

For a very small club, they managed to do some dramatic lighting for EMA. Smoke poured out from behind the stage, the drummer and bass player took their places, and then EMA took the stage, wearing a dark jacket, hood pulled up, over what turned out to be baggy white gym shorts. She opened with Where the Darkness Began, which is really a spoken word piece where she breaks down her theory of “The Outer Ring”, the ring of low-cost housing, strip malls, and generic apartments that exists in between the cities, now too expensive for creatives, and the suburbs, which are sterile and lack diversity. The Outer Ring is an in-between place, where freedom and creativity are possible precisely because they are random, decaying, yet diverse and full of potential…

Here is the set list I captured which should be complete. I was not familiar with the one Gowns song that she closed with.

After their set, EMA met fans at the merch table. I bought the new album Exile in the Outer Ring on vinyl, and also the zine, both of which she signed. I blabbered something about what a big fan I am. And she consented to take a picture with me, so I felt like I experienced my encounter with this luminary performer to the fullest.

Alex and I were feeling a bit noncommittal about the Blow, an electronic feminist pop art duo from Brooklyn. I didn’t know much about them, besides watching a few videos on Youtube. We hung out in the balcony for a while, and watched the first few songs from there. But before long I was drawn to get close to the performers, so we went down to the floor. 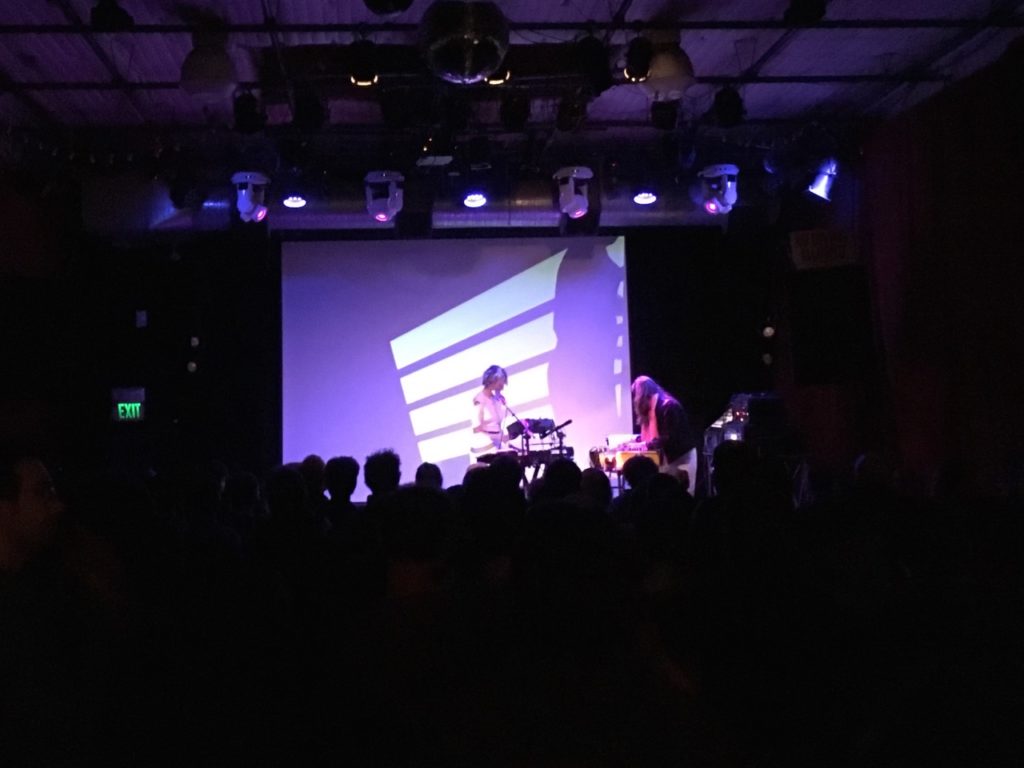 The Blow at the Rickshaw Stop

The Blow is Khaela Maricich on vocals and Melissa Dyne on synthesizers. In hindsight – and I have been thinking about this show a lot – The Blow were (probably) performing their latest album, Brand New Abyss. But seeing this performance from the initiate’s perspective, it felt like one integrated piece. Khaela would be introducing a song, or telling a story, while Melissa was generating beats and drones on her rig, but then it became clear that this was now a “number”, which would then merge as seamlessly into the next number until their performance came to an end.

Here are some of the themes I picked out of the performance. The Abyss – that void that opens up when the performer stops singing, and an audience member is compelled to yell out “we love you!” or some other inanity. Beauty and power. Capitalism (monetize this). Making art in a condo in Georgia. In general, the struggle to make unique, and let’s be honest not very commercial music, in this time of homogenized media and economic and moral free-fall.

This was certainly one of the most innovative and challenging performances I have seen in a long time. I felt that The Blow were in peak form. Khaela’s ability to improvise, to set the mood and take the audience somewhere unexpected. The subtle, fluid interactions with Melissa’s electronic accompaniment. I felt truly blessed to be in the audience that night. 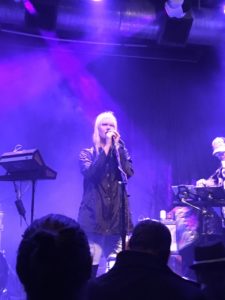 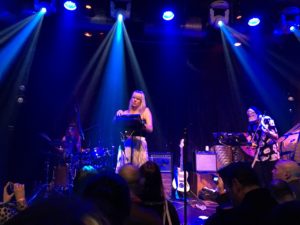 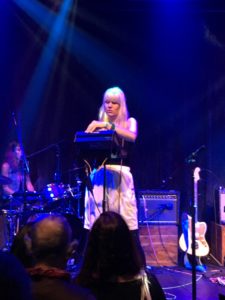 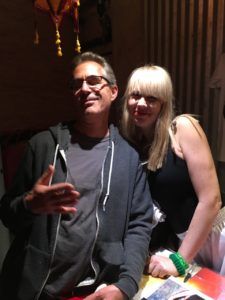 EMA Took a Picture With Me