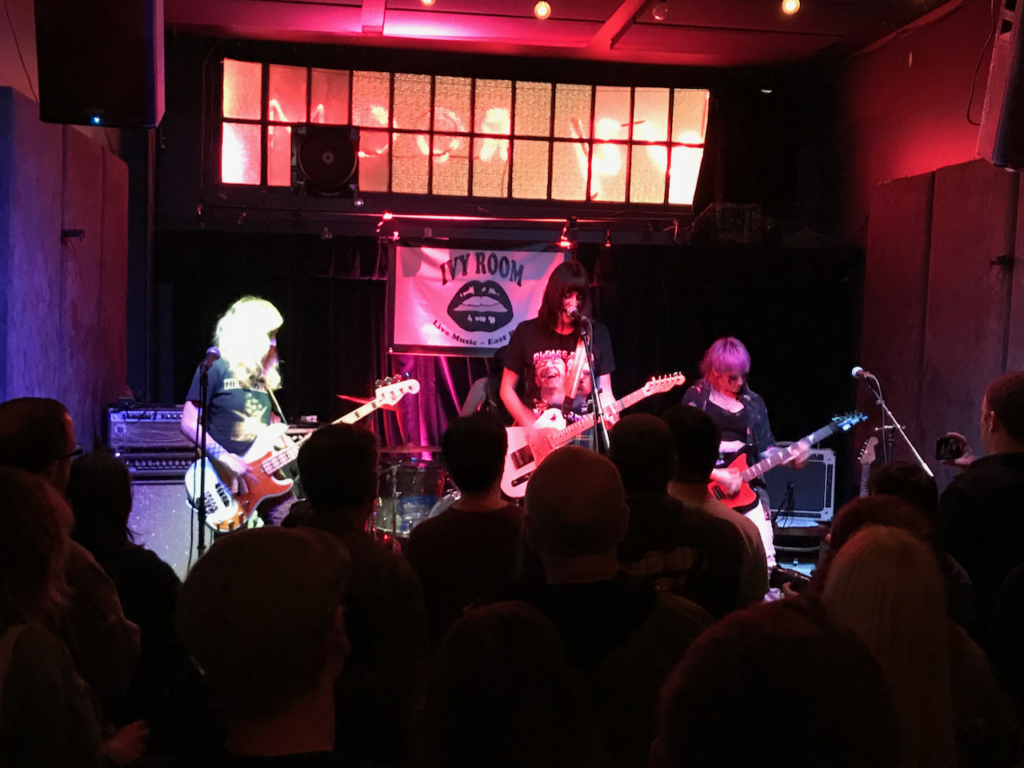 Friends, I am getting old! Sixty years and still going to punk shows. So old that I debated about driving up to the East Bay from Santa Cruz on a Saturday night to see a show. On the one hand Potty Mouth – a pop punk trio from Massachusetts (now Los Angeles) that I truly love – was on the bill. On the other hand, I had seen Potty Mouth play just about six months ago in Santa Cruz. In the end I voted to support a band I love and make the trek. It turned out to be the right call for a number of reasons.

I got to the East Bay around 6:30pm. I had a whole itinerary planned which started at the Berkeley Melo Melo kava bar on University Ave. I sat at the end of the bar and drank 3 shells (coconut shells of pleasantly euphoric kava tea) and a CBD drink. From there I drove down Shattuck through the tunnel to Solano drive. I found a funky neighborhood restaurant run by two Middle Eastern guys called Jerusalem Market and Burgers (the restaurant, not they guys!), where I had a totally satisfying burger, fries and a diet coke. I was feeling good, and ready to head to the venue.

When I got to the Ivy Room there was a guy out front with an extra ticket. The ticket was mine for the price of a beer, which was a good deal. His name was Chris and he became my club buddy for the night, which was nice. Chris was a fan of headliner Dressy Bessy, and did not know anything about Colleen Green or Potty Mouth.

I had checked out a few videos of Colleen Green before the show and I was definitely intrigued. She calls her genre “stoner pop” which is of course pop music that’s good to listen to when stoned. Her Twitter handle is @ColleenGreen420. She came out in a leather jacket over a short black dress. Colleen was low-key brilliant. With her sunglasses and straight dark hair she was channeling Joey Ramone. One of the songs she played in fact was “I Wanna be Degraded,” sung to the tune of “I Wanna be Sedated.”

Green’s music is pretty minimal (taped bass/drum tracks and Green on electric guitar and vocals). Nevertheless, I felt in the presence of real art. Green uses her minimalism to the best possible effect. Sometimes she comes off as snarky and worldly wise, but in other songs there’s an honesty and vulnerability which is compelling. I spoke to her after the show and she was very cool. I bought a couple of her recordings which have been in heavy rotation.

Potty Mouth was up next. The had a new (just 3 days) touring guitar player. She may have been a little rough, but her attitude was great. Abby, the lead singer, has black hair now and looks very Joan Jett, glowering at the audience with dark-rimmed eyes. Actually I was thinking how blond Abby is like Samantha from Bewitched, and black haired Abby is like Serena – a little wicked.

In fact Abby and the whole band were on fire. It was the most raw and intense Potty Mouth set I’ve seen. They ripped through following songs, plus probably a couple more that I forgot:

Potty Mouth has great songs, and a great rock-n-roll attitude. I encourage my readers to check them out!

Dressy Bessy was the headliner. They were formed by singer/songwriter/guitarist Tammy Ealom and some guys in 1999. I actually own their fourth album Electrified which came out in 2005. I think I liked the song “Who’ll Stop the Rain,” but when I tried listening to the album to prepare for the show I honestly didn’t connect with it at all. Ealom does have a pretty good voice, but the songs just really don’t do anything for me. Nevertheless, I stuck out their entire set at the Ivy Room. I will say that the band was having a good time, and seemed really appreciative of the good turnout. They played a decent set and then wrapped up. But wait – Tammy came out onto the floor with an acoustic guitar, and played an intimate mini set with 20 of us standing around in a circle. There were clearly a number of dedicated fans in attendance, and it was nice to see that kind of genuine feeling between artist and audience.

I headed back home with some new music, and having made a new friend. All in all a good night out for this old fart. 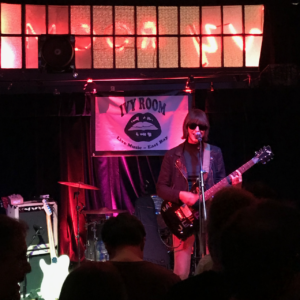 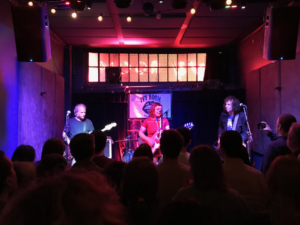 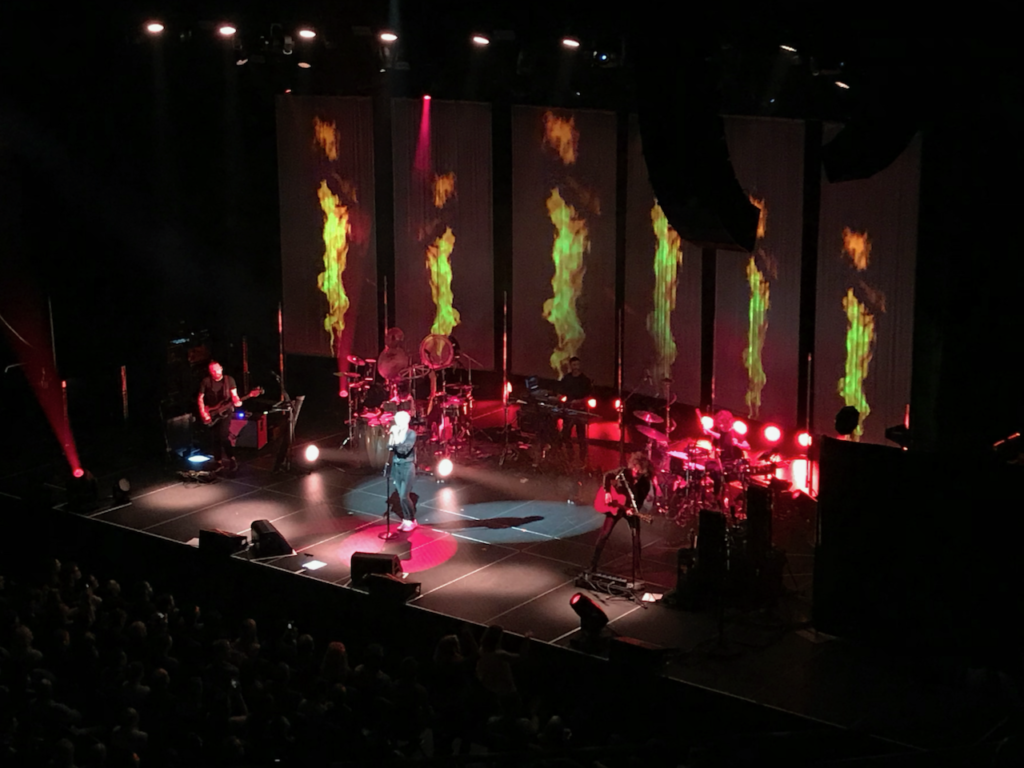 Dido at the Masonic Auditorium

Longtime readers of Girlbandgeek (a sort of oxymoronic category) will know that I’m mainly a devotee of alternative and punk bands, but I do like good pop music as well. Thus there will always be a place in my heart for Dido and her electrop stylings.

Dido blew out the charts with her debut album, No Angel, which came out in 1999 and has sold 21m copies. Her second album, 2003’s Life for Rent, was similarly huge, selling 12m copies worldwide to date (source: Wikipedia). My wife and I had the first two albums, and they received a lot of playtime in our house. Dido has released 3 more albums since Life for Rent, all good, but none of which attained anything like the popularity of those first two.

Dido is a gifted songwriter, with keen emotional instincts and a lyrical flair. She can write heart-melting ballads, or wicked takedowns of former lovers. She has a lovely, clear voice, by turns kittenish and powerful. Besides her great songwriting and enchanting voice, I would say a large part of her success is her beautifully produced sound which is a very dance-electronica flavor of pop. Her songs tend to have a driving beat, around which acoustic guitar, synth swirls and her breathy voice spiral in a pleasing and hypnotic way.

Dido’s Bay Area appearance was at San Francisco’s Masonic Auditorium, an “icon of mid century modernist architecture” according to their web site. We found our seats in the balcony and had time to wander around. We checked out the merch, bought some ginger beers, and scoped out some points of interest on the second floor. It’s one of those dizzying spaces where you’re looking down on the crowds below over a slender, waist-high barrier. A huge mural with lots of Masonic symbols occupies one wall of the atrium.

Anyway, on to the show! Opening act was Jack Savoretti. He wasn’t really my thing but the band had a good sort of contemporary folk rock sound. Jack was personable and had a nice voice. They played about six songs, thanked us, and they were gone.

We waited 30 minutes and then the band took their places to much applause. Moments later Dido bounced out looking casual and relaxed in black pants and top, and white tennis shoes. The audience was good and ready for her, and the crowd retained its enthusiasm for the entire performance. Dido in turn was very appreciative. She has a very cute and laid-back stage presence that was super appealing. She alluded to the thrill and challenge of achieving mega-stardom right out of the gate with her first album. The set-list featured many tracks from this year’s Still on My Mind, as well as a liberal selection from her first two albums. The band was excellent and they were having a good time, which I like to see. The live versions of the songs imbued some new-ness without being unfaithful to the originals. Most of the songs involved the full band, but she played two or three with just one or two accompanists which was effective. Overall it was a totally satisfying performance. If you’re a fan of Dido’s music I would encourage you to catch her live show if you can! 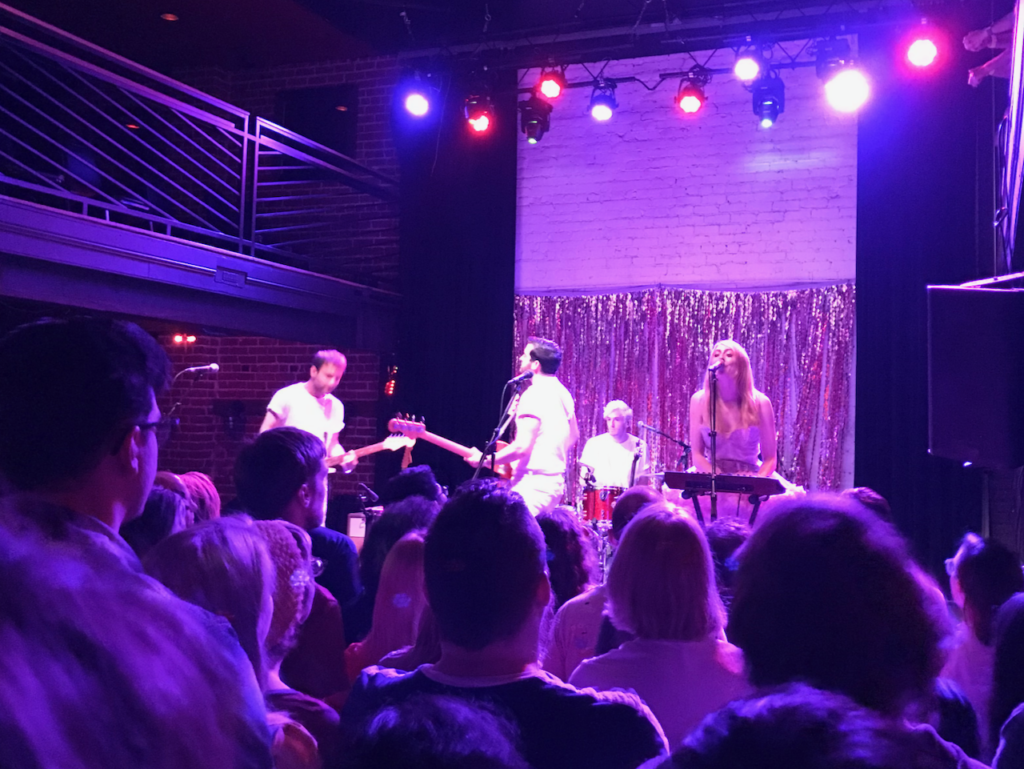 Charly Bliss at the New Parish

Charly Bliss had kind of been on my radar for a year or two before I really clicked with them. A few songs from their debut album Guppy would appear in my Spotify recommendations. I looked at a couple videos, too, but was not hooked until 2019’s Young Enough came out. I listened to the opening track Blown to Bits, and realized in that moment that Charly Bliss rules. So it was with great anticipation I arrived at the New Parish with my friend Scott in tow.

Charly Bliss was formed by siblings Eva and Sam Hendricks in 2011 (per Wikipedia) along with guitar player Spencer Fox and bass-player Kevin Copeland. Current bassist Dan Shure joined in 2014 after Copeland left. They released an EP in 2014, and their first full-length Guppy debuted in 2017 to critical acclaim. Their second full length Young Enough came out May of this year.

I didn’t quite connect with opener Emily Reo, but she was super cute. Kind of a cross between Tori Amos and Sadie Dupuis. She had bangs and cascades of ringlets framing her face. She played keys and keytar. The music was kind of shoegaze-y, techno pop. She had a pretty voice and the band was very tight, but not very emotive. Emily Reo and band finished their set, gave their farewells, and it was time to psych up for the headliners.

I was down on the floor, and trying to get closer to the stage, but the crowd was packed in tight in anticipation of Charly Bliss. Finally the band came out all dressed in white (matching the Young Enough video) and Eva bounced out in a confection of pink satin and tulle. Eva played the opening chords to Blown to Bits, and I was in heaven for the next 60 minutes.

Charly Bliss was on fire from the moment they took the stage. Their genre is pop/punk, but they are all trained musicians and it shows. The drummer is so tight and so explosive – just really good. Spencer Fox is a really great guitar player, alternating between tasteful fills and concise, melodic leads. And the whole band sings and harmonizes which is awesome. They are so appealing and charismatic – I really want this band to get big!

Eva has Liza Minelli-level star quality, with huge expressive eyes, ringed with scarlet eye shadow. She definitely reaches into her vulnerable place, and sometimes she looks like she’s going to burst into tears. Eva spoke to the audience very enthusiastically and as if we were already on intimate terms, which I found endearing and good. (This doesn’t always work for me, but I am so ready to be friends with this band!) They worked so hard on their new album, and they are proud of it. It’s been hard to bare their souls so much, but fans have been supportive. They are having so much fun playing the new songs. She really does not hold back.

About ¾ through the set, after pausing to say the above, Eva’s brother Sam came out from behind the drums and stood at the keyboard. They played Fighting in the Dark, the four of them standing, facing the audience. It was moving.

I didn’t get the setlist, but they played most of Young Enough and Guppy. The only big omission from my point of view was Westermarck, but I’m not going to hold it against them. The encore was a very spirited Mr. Brightside (originally by the Killers).