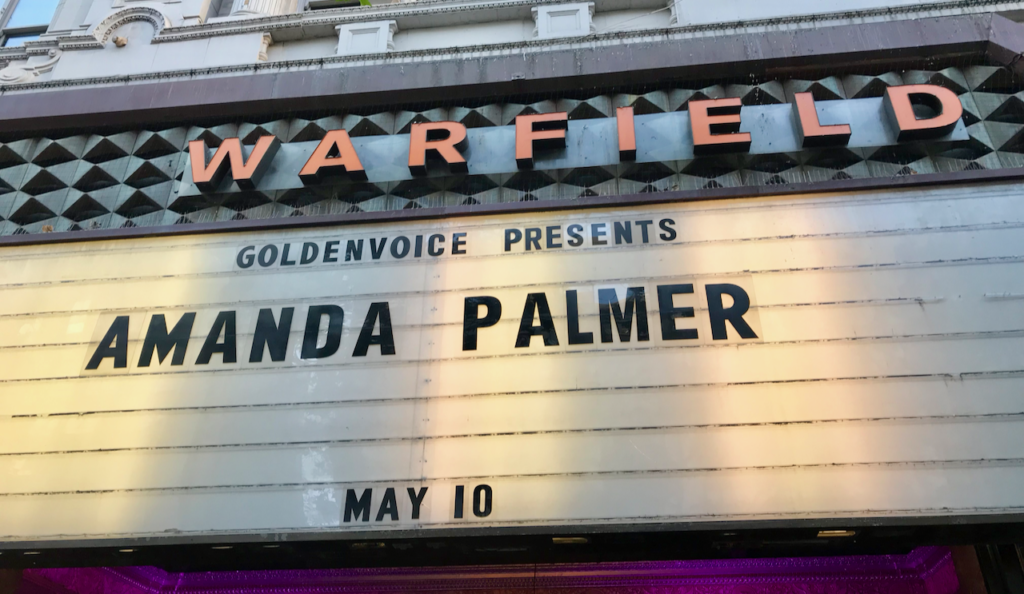 I was first introduced to Amanda Palmer about 15 years ago when a friend gave me a copy of the first Dresden Dolls album. Palmer is one of those artists who’s like an emotional and musical cyclone. It’s clear that she’s a person who feels things – joy, grief, attraction – much more intensely than most of the rest of us who tamp our emotions down to avoid those highs and lows. In that first album are all the hallmarks of the music Palmer and her collaborators have been making for the last two decades – catchy and sometimes unsettling songs with clever lyrics, powerful vocals, and Palmer hammering on the piano.

For whatever reason I did not follow the subsequent Dresden Dolls and Amanda Palmer solo releases. A couple of years ago Palmer’s book The Art of Asking came out, and my wife bought it and read it. That brought a renaissance of things Dresden Dolls and Amanda Palmer into my life. I ended up reading The Art of Asking, too, and loved it. Palmer describes her journey as an artist – from street performer, to finding her artistic community in Boston to the formation of the Dresden Dolls with Brian Viglione, her incorporation of email and then social media to connect with her fans – anticipating what every artist does now – and many things that followed after. It explores her mystical relationship to putting herself out there, and how in turn the Universe provides. And over the course of her career, she has stirred up her share of controversy as well.

The current tour is the live show that goes with the latest album, which is entitled There Will Be No Intermission, which arrived on March 8 of this year. My wife pre-ordered it on vinyl along with a companion picture book. It is clear that almost 20 years into her music career, Palmer is showing no signs of mellowing or toning down her message.

Palmer is married now (to author Neil Gaiman) and they have a child. So her latest work talks about some of the personal journeys around motherhood, and more difficult subjects such as her miscarriage and her abortion. There are also political and planetary themes playing out in TWBNI, particularly allusions to the climate crisis and the corrosive effects of terrorism, racism and misogyny. The cover art of her standing stark naked on a post, surrounded by the rising waters brilliantly captures the intersection of her naked, self-revelation and our shared fears about climate collapse.

A big part of this two and a half hour performance was this big conversation Amanda is having with all of us. Every song, it seems, comes with a story. And Palmer is a fine story teller. There is the stark revealing of very personal and dark experiences, noting “I am an artist – my job is to take dark and make light.” And she delights us with her cleverness as well, pretending to diss the Disney musical Frozen, and then breaking into Let It Go as the penultimate number.

The show’s finale, fittingly, is The Ride off of No Intermission, a ten-minute emotional tour de force, in which Palmer compares life to a rollercoaster ride:

This was quite an event, and surely one of the most memorable performances I’ve seen.